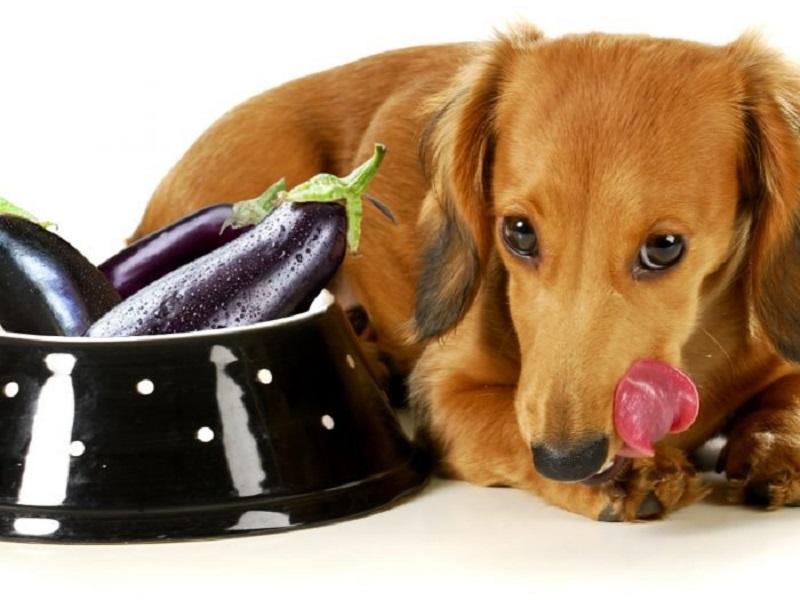 Eggplant is a vegetable with a long and colorful history of parents who have tried to convince their children to eat it and children who have wanted nothing to do with it. Eggplant has become an integral part of numerous dishes in all manner of cuisines. Thanks to industrialized farming and modern freight methods, we can have it fresh just about anywhere in the world, and the number of uses for it only grows as time goes on.

No less a part of mankind’s culinary traditions is the seemingly universal practice of tossing table scraps to the dog, whether as their actual meal or for ulterior motives like not having to actually clean up the leftovers. Any remotely experienced dog owner knows that dogs don’t eat the same things as people, though; how will your pet react to an offering of eggplant?

What Vegetables Can Dogs Eat 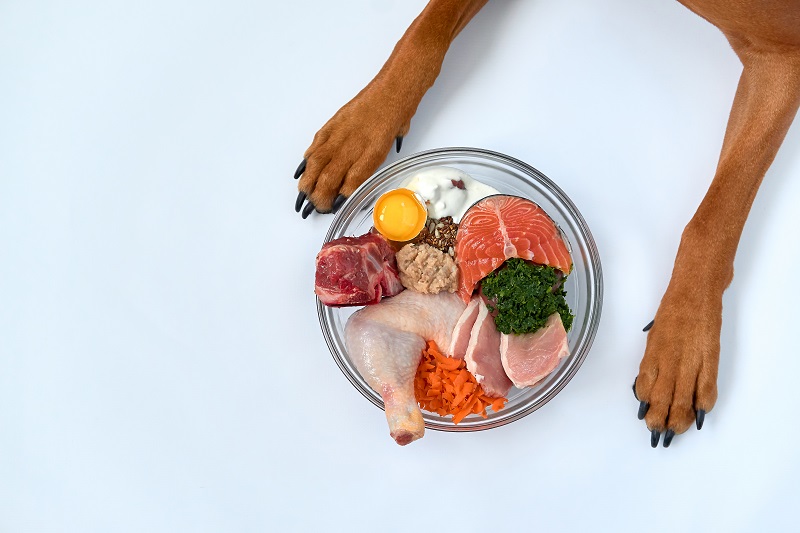 There are few things in a dog’s life which humans have not spent considerable time and resources to hone to the absolute peak. The modern dog can look forward to a wide variety of bedding, toys, and even medications, developed with no less scientific effort and methodology than is used to create the accouterments of a human lifestyle.

Pet food is paradigmal to this; our dogs are treated to dozens of varieties of chow, with endless combinations of ingredients and all the most demanding standards for several different methods of preparing the food for the dog’s enjoyment.

Broad as it is, that grand spectrum of dog food is still governed by certain scientific constants that form the basis for any attempt at a new brand of kibble. Dogs prefer a largely carnivorous diet, favoring meats of all kinds over the rest of the basic food groups, and are naturally equipped to handle both raw meat and several parts of an animal that humans tend to find inedible, or at least unpleasant.

Despite their love of meat and higher protein requirements, wild dogs will naturally seek out other foods from time to time, including plants and fruits, with the aim of adding natural fibers to their diet.

Domesticated dogs, although presumably getting their essential nutrients from whatever brand of food their owner has selected, will also eat whatever their human hands them; for many dogs, this is a conditioned reflex more than anything, and has no connection to whether or not they are hungry.

That conditioned reflex can get dangerous when people want to share their own food with their pets; while dogs share multiple uncanny similarities with humans, their digestive systems are different enough to make something enjoyable for humans a danger to dogs. The gold standard of this is chocolate, which contains a chemical structure that the dog’s digestive tract cannot process; even miniscule quantities of chocolate can cause serious symptoms of poisoning, and as little as one ounce per pound of dog has been known to be fatal.

Plenty of foods are less damaging, but simply nutritionally unadvisable; humans will tend to have far more starch in their diet than a dog usually needs, and sharing things like white bread or pasta with your dog may cause their metabolism to slow to digest it all and deprive them of the protein they both need and want. Cooked food displays this problem the best; because dogs will eat everything raw, the cooking process can change the protein structures of your food to the point where they may have trouble digesting it.

This aspect can change depending on how the food is cooked as well as what food is under discussion; for instance, fried or breaded foods can be problematic for one’s pet, but the same food roasted or grilled will be fine. For meats, one might find that the part of the animal in question matters too; dogs will happily chow down on organs or bones but have a lower tolerance for fat than humans do and should not have it in their diet if possible.

Lastly, there are some things that do not actually harm your dog, but which can throw off their digestive system to the point where you, as their owner, prefer not to deal with the consequences; you may think your dog is housebroken, but accidents can happen are all the more likely if you don’t watch what your dog eats. An example with which you may be familiar is anything containing hot spices, such as chili or tabasco; either one can cause your dog serious bowel discomfort and a messy few walks once it is digested. 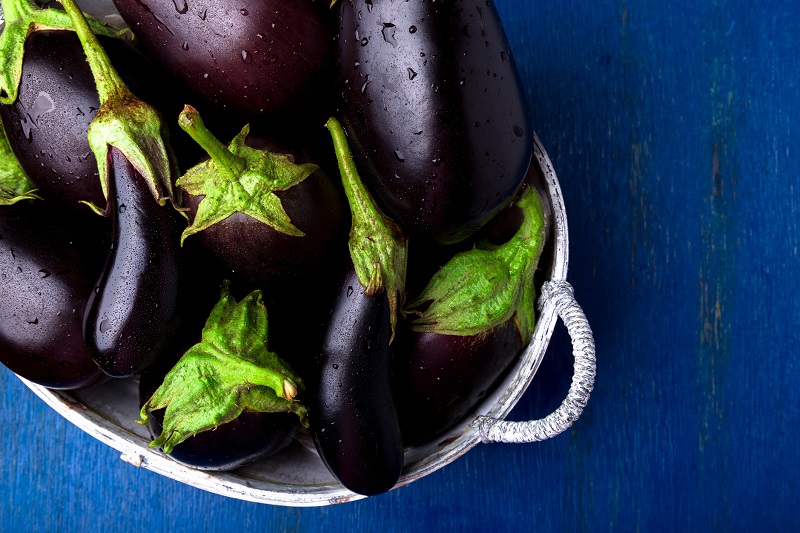 Knowing as we do the background for whether or not one can share food with a dog, it is possible to better revisit the original question of where eggplant falls on the de facto scale of acceptable treats to potential poisons; is it safe to feed a dog eggplant, and if so in what quantity? These questions are both important, and just a little trickier than one might expect to answer.

As a general rule, eggplant is safe for dogs to eat, although your pet may not find it very appetizing; even to relatively undiscerning human taste buds, eggplant tends to lack any particularly exciting flavors and offers only a spongy texture and watery taste. Dogs, who are by nature intent on finding a more meaty texture and flavor in their food, may reject the eggplant after a bite or two and set out in search of something more to their liking; if this happens, do not try to force it on your pet, as it will make them uncomfortable and possibly even damage their mouth.

Should your dog take to the eggplant, they will at the very least be getting a healthy snack, if not a particularly tasty one; eggplant contains significant quantities of vitamin B6 and vitamin K, as well as numerous chemicals that are ordinarily hard to get into a dog’s diet without artificial additives. An eggplant has relatively few calories for its size and is a great source of natural fiber, so you can use it to keep your dog feeling full while still helping them to lose a few pounds if they’re getting overweight.

Nature has one more curveball in store for pet owners looking to get their dog snacking on eggplant – some dogs display serious allergic reactions to eating it, with symptoms like fever, airway inflammation, and urinary problems developing quickly and severely enough to put your dog at risk if they are left untreated. Unless you are sure that your dog is not allergic to eggplant, watch it carefully the first few times to ascertain that it is not experiencing an allergic reaction to its new food.

When to Go to the Vet

Although eggplant is a vegetable and usually won’t harm your furry friend if they have a little nibble on one, you should monitor their behavior and keep an eye out for signs of distress and discomfort. It is always better to be safe than sorry when it comes to your pet, so if they show the following symptoms, take them to their health care provider.

Frequent urination can be a troublesome sign, but it is one that most dog owners overlook. This could cause dehydration or even be a sign of an allergic reaction, so getting this checked out is vital.

Restlessness is the first sign of discomfort. This could be displayed as a snappy mood, irritability, or difficulty sleeping. Your dog may be in pain and getting this seen +is advised.

You should take your dog to the vet as soon as possible if they have a seizure after eating something new or inappropriate for dogs. This is also the case if your dog is prone to seizures, so never overlook a seizure, especially if it happens after certain food.

This is also a very difficult symptom to diagnose, but regardless of what is causing it, it should be looked into right away. Your dog might look breathless or struggle to walk fast or run if their heart rate is raised.

An unresponsive dog is not a happy dog! If your dog is feeling weak or isn’t as playful as usual after eating eggplant, then take it as a warning sign and check out.

Diarrhea and vomiting is an obvious sign of illness. This could be very serious, and your dog could get dehydrated or worse.

Dogs suffering from health conditions such as heart disease, kidney problems, bladder stones, inflammation problems, or any other serious health problems might be more sensitive to certain foods. If your dog has underlying health problems or is getting treatment for a condition, you should only feed them dog food and refrain from human food.

As a rule, the eggplant should be a perfectly safe food for your dog, as it contains a number of important vitamins and minerals and fills them up while keeping their calorie count down. These health benefits aside, take care not to let eggplant become the main course in their diet.  As previously mentioned, dogs need a fairly high percentage of protein to keep going, and eggplant is not the place for them to get it.

Keep in mind that your dog may be allergic to eggplant, and diligently check for signs of a reaction and report them to your veterinary doctor. Additionally, just because eggplant is acceptable does not mean every food is; check each meal you want to share separately before putting it in your dog’s bowl.

You May Also Like: Best Dehydrated Raw Dog Food
The Woof Whiskers Staff 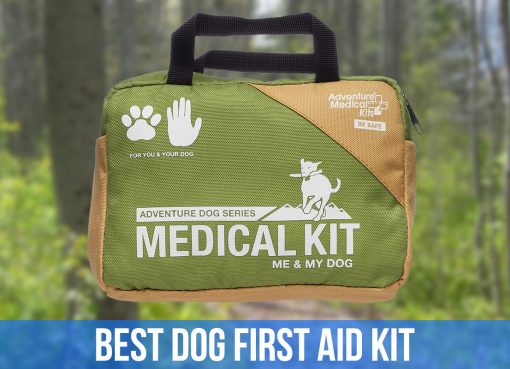 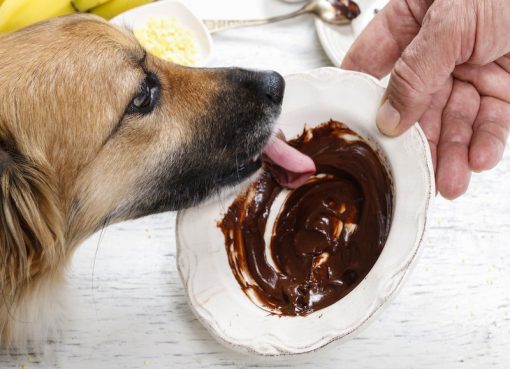 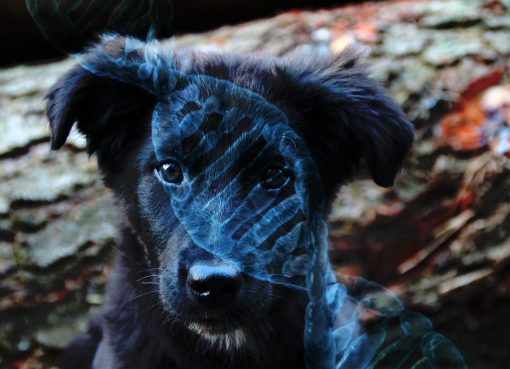