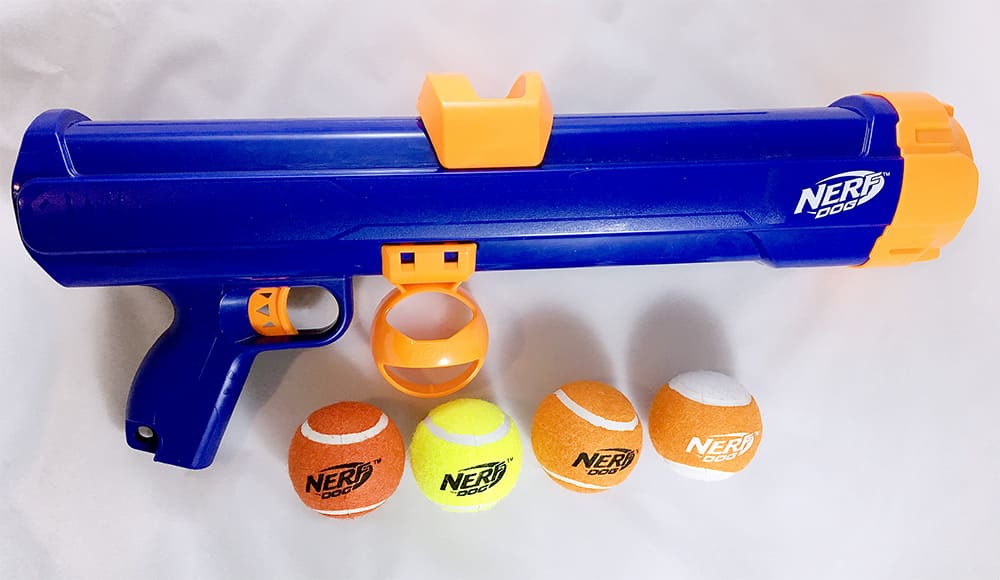 Nerf Dog Tennis Ball Blaster launches further than most automatic ball throwers we’ve tested, and it just happens to be a fraction of the cost. It also comes equipped with 4 regular-sized tennis balls. 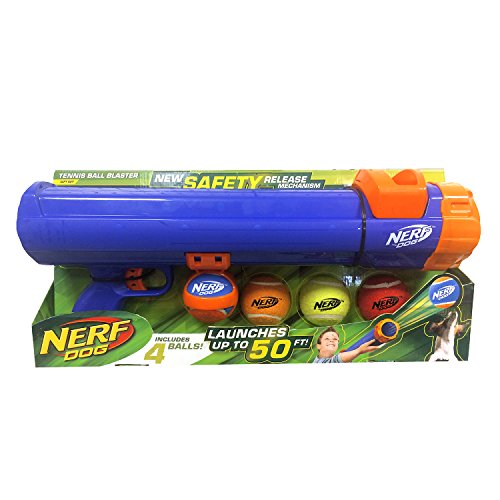 Nerf is a legendary toy maker in this space, so it’s only natural they’re listed as one of our most recommended ball launchers. Nerf introduced their lineup of dog toys back in 2013 and have since been one of our favorite dog toy makers for playing outdoors. We conducted a thorough review of the Nerf Dog Tennis Ball Blaster by testing everything from launching distance and noise levels to design and features. Take a look below as we unbox the Nerf Dog Ball Launcher and see how it compares to others we’ve reviewed.

Nerf Dog Ball Blaster is packaged very similar to traditional Nerf toys (ie. Not inside a box) and is simply zip-tied to a cardboard-backing. Overall, after unpacking you will find the Nerf Dog ball blaster itself and 4 Nerf Dog tennis balls. That’s it! Not even any paperwork or manuals (instructions can be found on the back of the box). As for setting it up, there is nothing to do. The Nerf Dog Ball Blaster comes ready to use – simply put a ball into the front and you’re ready to go! 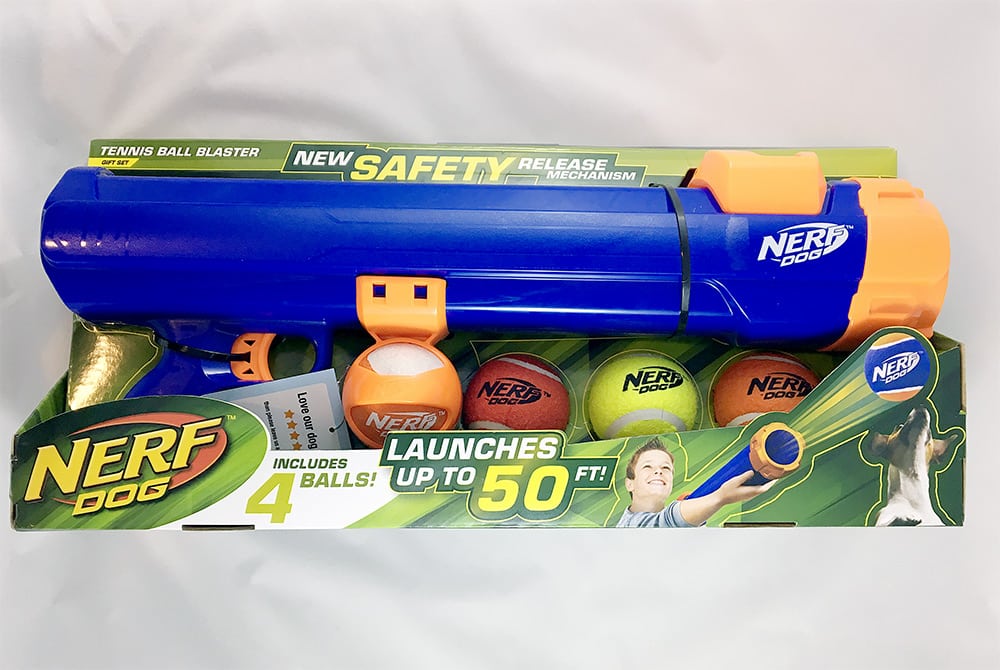 Nerf knows how to make a statement and market to children with their designs. Even though the thrower itself and the packaging looks like a children’s toy, it’s definitely meant for any dog owner! The overall design of the Nerf dog ball launcher is simplistic yet vibrant. The launcher itself is blue and all main components are bright orange including the trigger, ball holder, loading mechanism, and front of the thrower. The side of the device has the traditional Nerf logo stamped on it along with the 4 balls (which also come in an assortment of colors).

Since the Nerf Ball Blaster is so simplistic, unique features are minimal. However their core features work amazingly well and compare with the best.

Unlike automatic ball launchers which have pre-set distances to select from, the Nerf Dog Ball Blaster simply has an adjustable loading mechanism. To adjust the distance, you simply pull the lever back further to release more power. Nerf claims to reach 50ft by pulling the lever all the way back – keep reading below to see our hands-on test.

This is more of a design feature, but nonetheless, this Nerf launcher has no exposed moving parts which make it completely safe to use for both yourself and your dogs (just don’t aim it at them!). 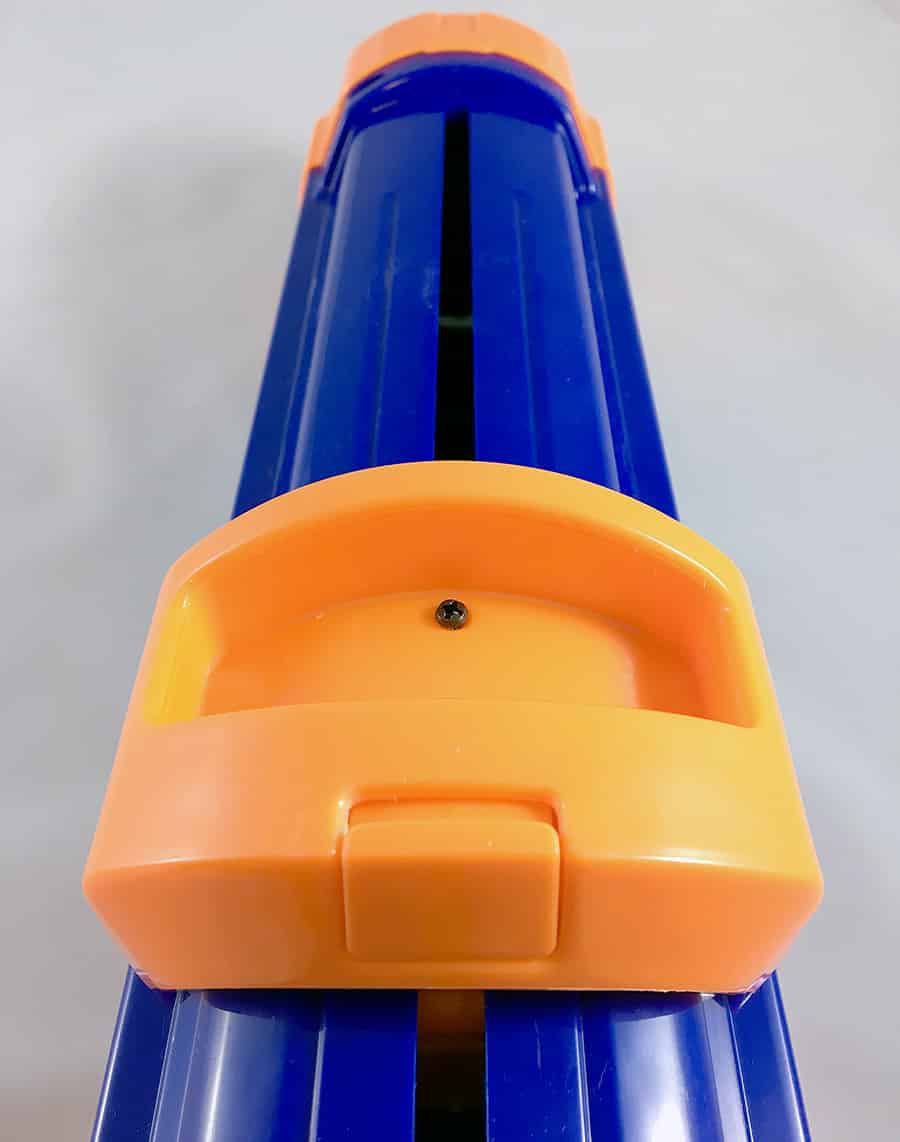 No more picking up slobbery, wet tennis balls for a game of fetch. You can simply place the nozzle of the Nerf Dog ball thrower on top of the tennis ball on the ground after your dog fetches it and it securely loads into its spot for another go-around. 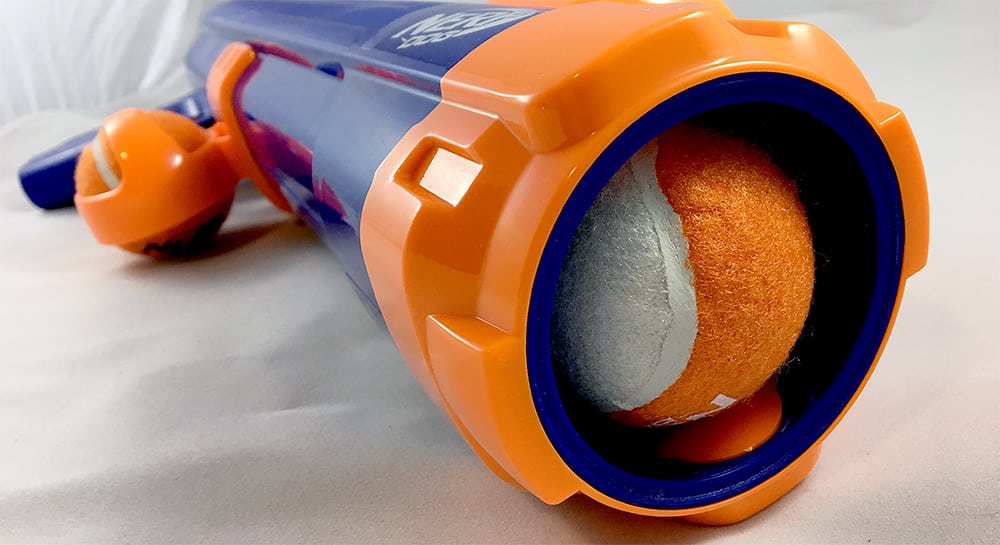 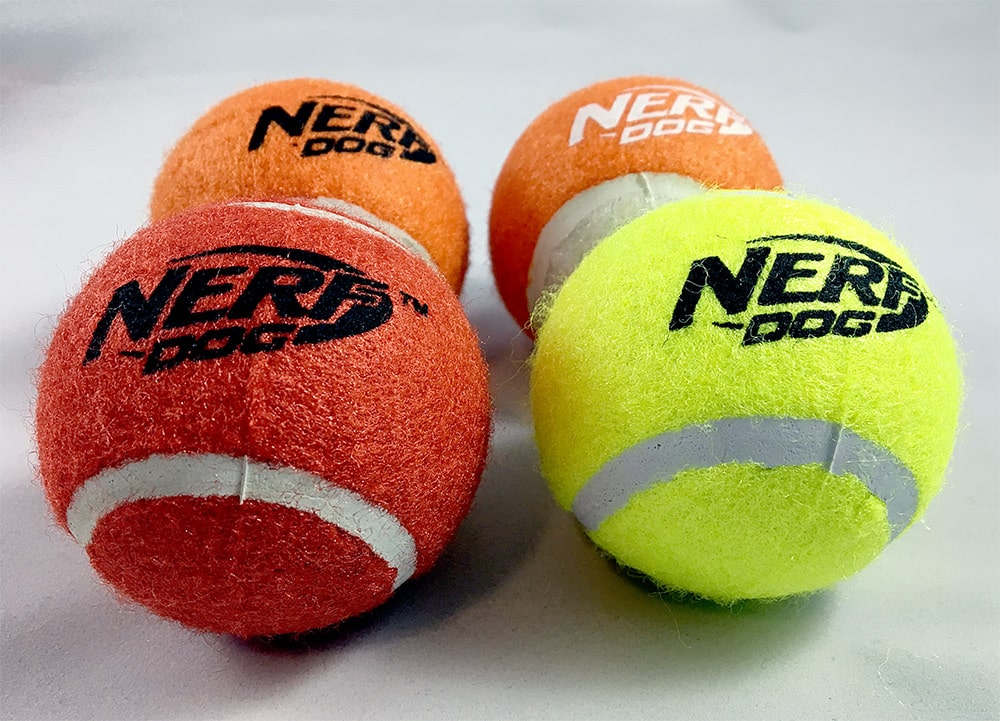 The launcher itself also has one ball holder beneath the device. Great for storing an extra ball when one gets lost or too slobbery! 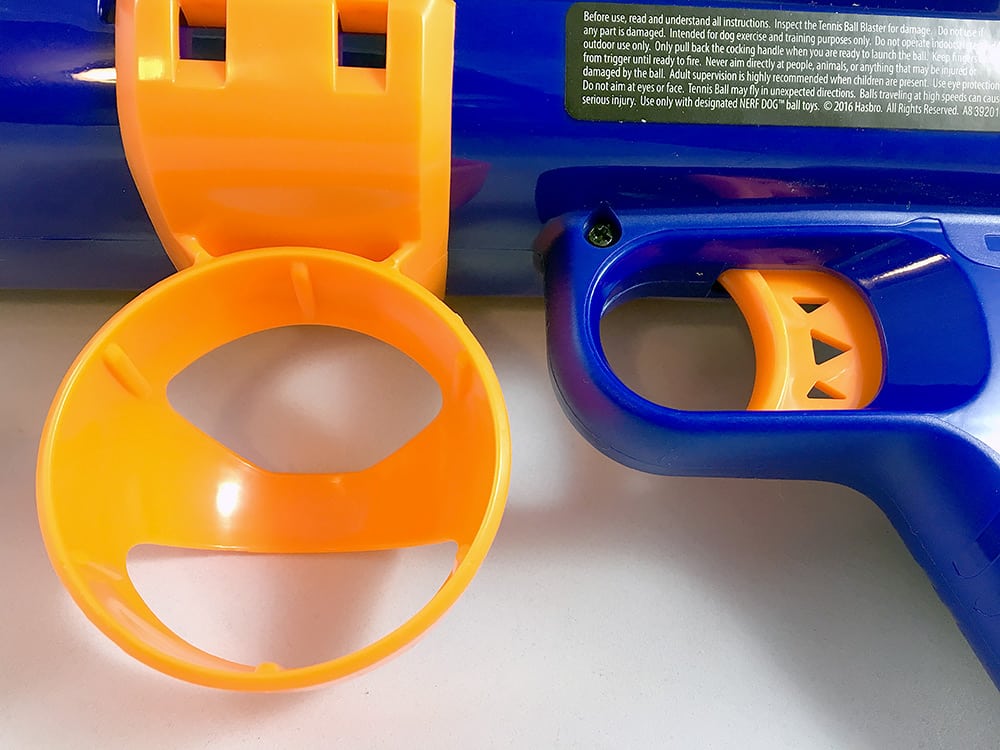 Nerf does not specifically state the main use for this. Most of the automatic ball launchers we review specifically state they can be used for both indoor and outdoor. However, after using the Nerf ball blaster, we highly recommend this as an outdoor ball thrower for its full potential. We used it a little bit inside by aiming it down the hallway but with the lack of space, our dog nearly got hit multiple times.

We field-tested this ball thrower and came way impressed with the results. We found the thrower it work pretty consistently, delivering throws between 50-60 feet on average. 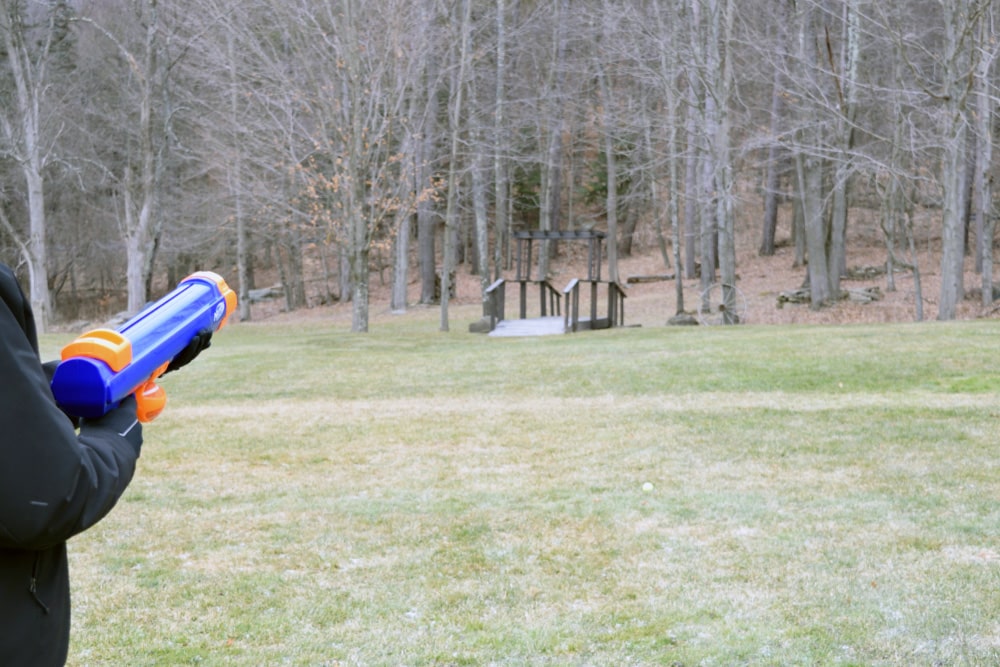 We really liked the design of the top sliding handle, used to prime the shot. It felt much sturdier than other models we tested, so we believe the Nerf Dog Ball Blaster will hold up better than most in this category. 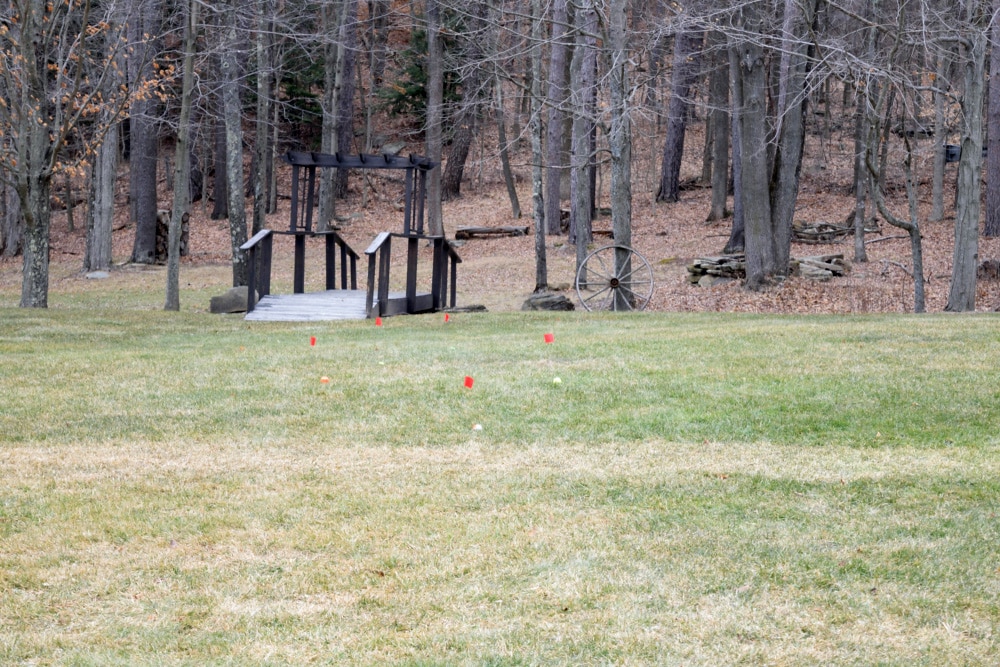 We’re thrilled to see Nerf join the ball launcher market and put out a product that competes with or outperforms competition. The simplicity of the thrower is what we like most – it takes no setup and can be used right away. Balls can be launched further than most automatic ball launchers but does not include the ability for automatic fetching.

Overall, when looking at the price point and performance, the Nerf Dog Ball Blaster is an amazingly fun option for exercising your dogs. 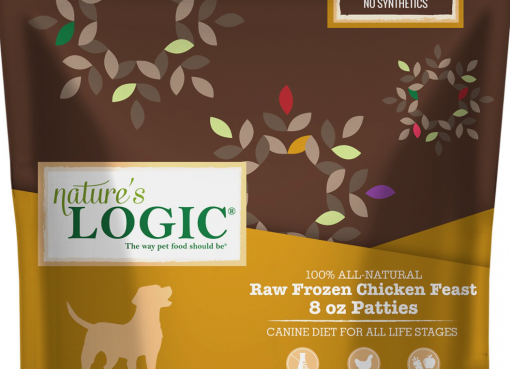 Best Frozen Raw Dog Food for 2022 [Our Reviews and Comparisons] 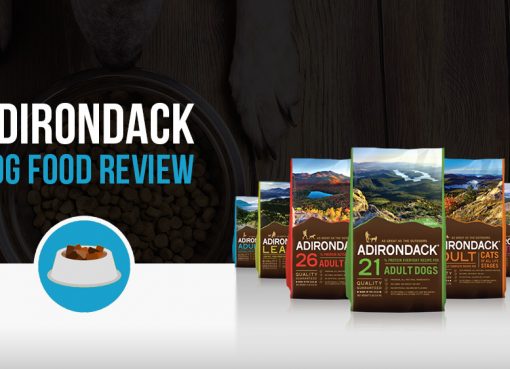 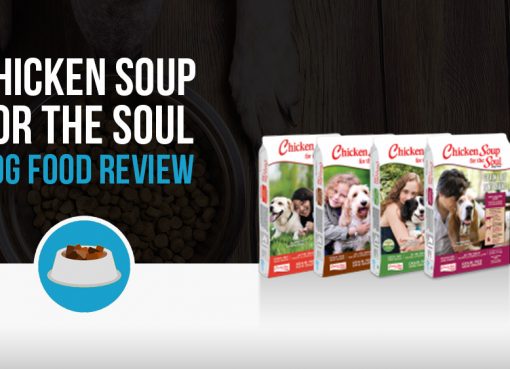