Home » Reviews » Trifexis vs Sentinel: Which One is Best? 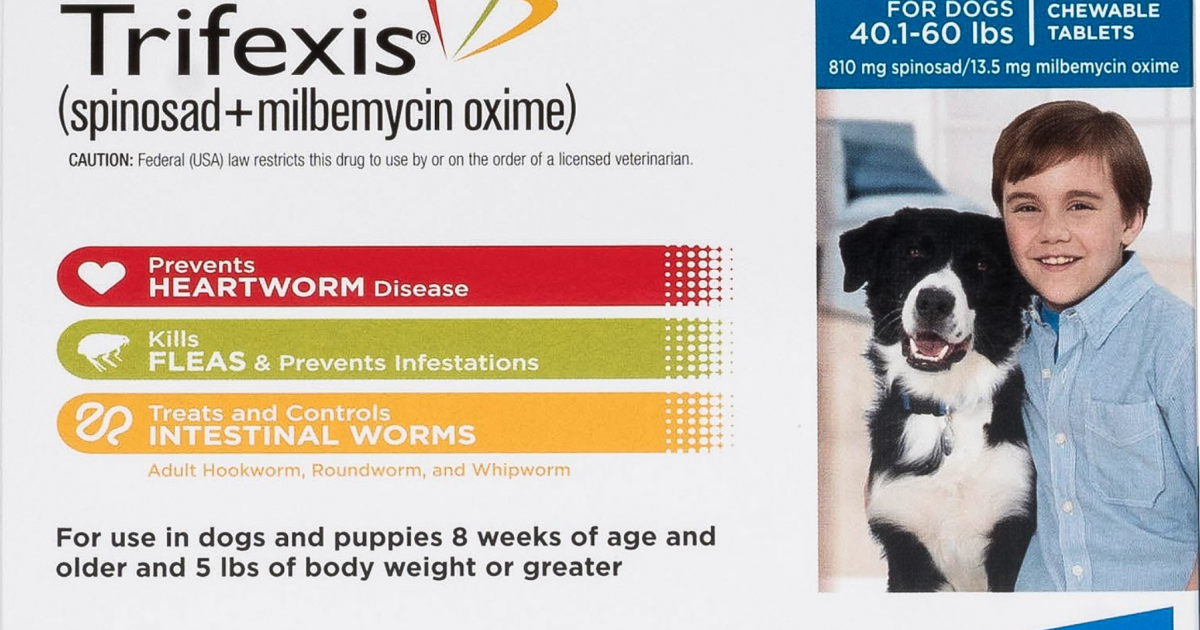 In this review, I will be comparing Trifexis vs Sentinel, and seeing which product line stacks up better! Both of these products are different treatments for heartworms, adult roundworms, adult hookworms, whipworms, and provide protection against flea eggs developing.

These tablets are aimed at treating all of the above, but also reinforcing your pup against future harm from heartworm disease and intestinal worms. Products like this are aimed at dogs over the age of four weeks. Before giving your pet any extra treatments like these, you must get a diagnosis of heartworm or other worm issues from a veterinarian professional first.

Both brands of worming treatment are available in chewable tablet form, with Sentinel also offering a form of flavor capsules that are not chewable. They can be found in numerous pet stores, and also online, and I will be linking to a storefront where you can purchase any of the following products.

In this review, the method I will be using is a fairly simple one. Firstly, I will be giving you a rundown of the main features of 7 different products on sale here between the two brand lines. After each outline, I will briefly outline the main pros and cons of the tablets, letting you know any extra positives or downsides that might not be covered in the first summary.

In the end, I will decide which brand’s line comes out on top in Trifexis vs Sentinel worming tablets and select a top product from the victorious brand.

Finally, there will be a conclusion that summarises the reasons for my findings, so if you find yourself short of time, check that out for a nice overview of the competition between Trifexis vs Sentinel. 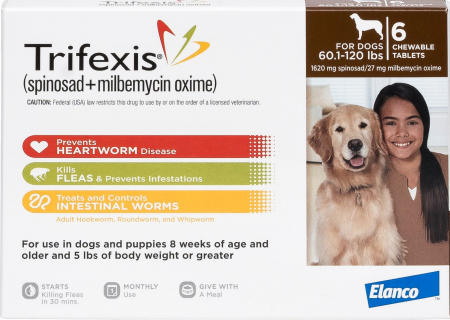 Trifexis’s available brands focus mainly on chewable tablets that dogs can take. The brown box is aimed at dogs between 60 and 120 pounds.

The standard dosing schedule for dogs of this size with treatments akin to this one is one tablet, delivered orally, once per month. Trifexis Brown Box of Chewable Tablets is no different, requiring a monthly dosage.

The dosage in this instance is 1620 mg Spinosad and 27 mg Milbemycin Oxime. Spinosad is a specific insecticide derived from a type of worm that is common among worm infections in animals (especially dogs). Milbemycin Oxime is an active veterinary drug that is used as a broad-spectrum antiparasitic, normally placed in medication that treats worms and mites within animals.

Ingredients like the ones listed above are relatively common in worming tablet treatments, especially Milbemycin Oxime, which can also be found in Spectrum’s range of products. Although rare, some side effects listed from these ingredients include: 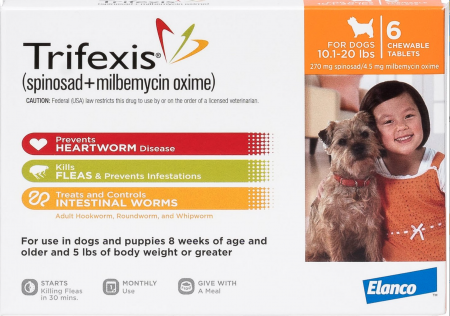 The orange box from Trifexis’s Chewable Tablet range is aimed at smaller dogs, treating dogs that are above 10 pounds in weight but less than 20 pounds.

As such, the dosage quantity shifts accordingly to accommodate this smaller size of a dog. Due to its demographic of small breed owners, the dosage is magnitudes smaller than the previous entry on this list. For smaller breeds, Trifexis provides 270 mg Spinosad and 4.5 mg Milbemycin Oxime. This is over 1,000mg less of Spinosad than the dosage for big dogs.

The dose schedule, however, remains identical: one tablet once a month.

Like the product before it, the Orange Box contains flavored, chewable tablets that are meant to be pleasant for the dog to consume.

Side effects are the same as the previous entry, with the added caveat of vomiting being more likely in puppies under 14 weeks. 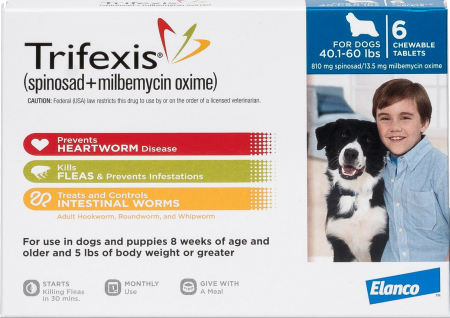 The last set of Trifexis Chewable Tablets for dogs deals with medium-sized canine companions: those weighing between 40 and 60 pounds.

Blue Box purchasers can expect the same 6 treatments as before, each to be administered once a month orally to the dog.

The flavor is again chewable beef, and it contains slightly different dosage specifications. The dosage is 810 mg Spinosad and 13.5 mg Milbemycin Oxime, which is half the Spinosad content of the large dog brown box, making sense when you consider the size difference.

It does seem slightly strange that a dog that is only slightly larger than a medium dog like this would have to have double the dosage of Spinosad, especially when it is shown to have so many potential conflicts with other medications. 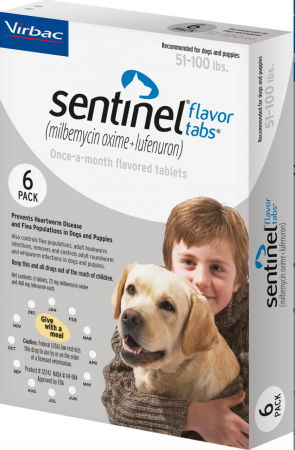 One of Sentinel’s most popular flavor tablets comes in a white box. This product has a standard 6 treatments, each containing a dosage of 23 micrograms Milbemycin Oxime and 460 mg Lufenuron.

This dosage is double the amount offered by the next largest amount Sentinel has available on the website above, but this makes perfect sense when the size of the dogs under consideration are taken into account.

As with most tablets of this type, Sentinel’s White Box Flavour Tablets should be administered orally once per month.

Vets have noted that some side effects of this product can include: convulsions, depression/lethargy, skin congestion, pruritus, urticaria, diarrhea, hypersalivation, anorexia,  vomiting, ataxia,  and weakness. It is always worth checking if this treatment will conflict with any medications your pet is currently on. 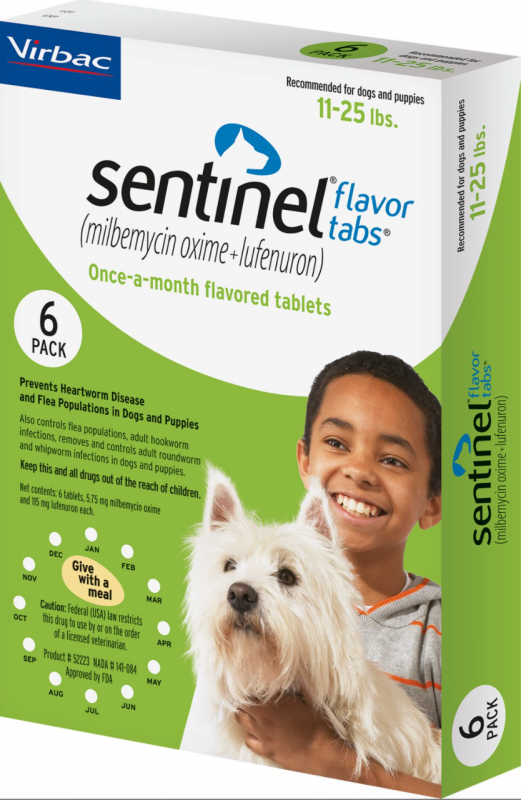 While prices from different retailers differ, what is handy about Sentinel as they tend to average between 30 and 50 dollars cheaper than Trifexis for similar products.

This tablet is non-chewable, but each Green box still contains six treatments, and as usual, the medication is supposed to be delivered monthly.

The chemical makeup of the medicine does change, however. This tablet uses 5.75 mg Milbemycin Oxime and 115 mg Lufenuron. The Lufenuron active ingredient is a similar antiparasite agent but focuses on some different parasites. The Milbermycim Oxime is in similar quantities as Trifexis, averaging slightly more.

Lufenuron has fewer compatibility issues with other medications, which is positive. 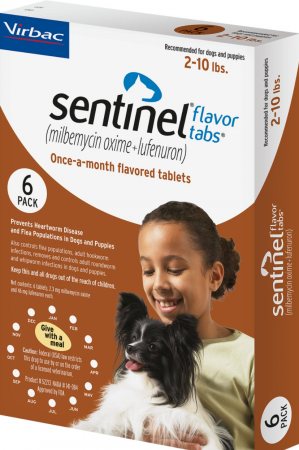 The brown box from Sentinel is aimed at the smallest possible type of dog.

Dosages in the brown box medication are dropped to coincide with the size of the dog breed. This medication is geared towards extremely small and toy breeds,  and so each tablet contains 2.3 mg Milbemycin Oxime and 46 mg Lufenuron.

Again, the dosage schedule recommendation is 1 per month.

See Related Topic: Revolution vs Advantage Multi: Which One is Best? 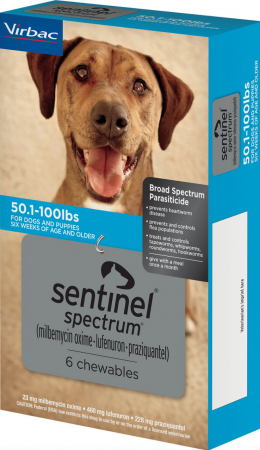 The blue box of chewable tablets is aimed at larger dogs, between 50 and 100 pounds.

The only difference between this and the others that have been already discussed is the dosage, catering to dogs that are not quite as big as the large categories from Trifexis.

For large dogs, the dose is 23 mg Milbemycin Oxime, 460 mg Lufenuron, and 228 mg Praziquantel. The Praziquantel is a brand new addition, which allows it a wider coverage of different types of parasites.

Like the Trifexis offerings, the Sentinel Spectrum tablet is in a chewable, beef-flavored form.

Overall, it can be easily seen that the best worming tablet for your pet would come from the Sentinel range. These flavored treats are cheaper, easier to administer, and have fewer health concerns.

Sentinel provides a far better worming solution, and my recommendation for a specific product from the range depends entirely on the size of your dog. The non-chewable range seems slightly better for general use.

You May Also Like: Credelio vs NexGard: Which One is Best? 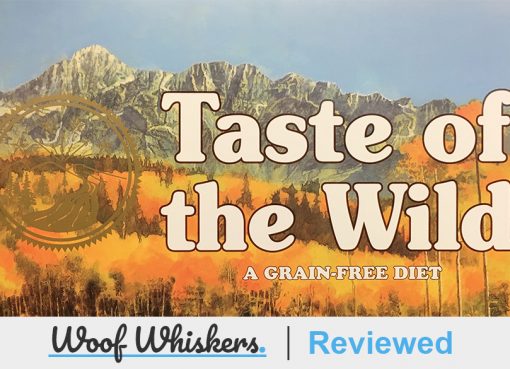 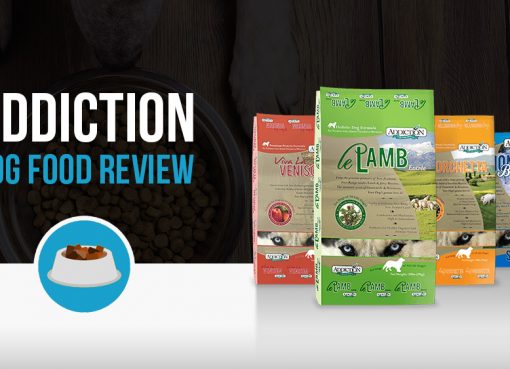